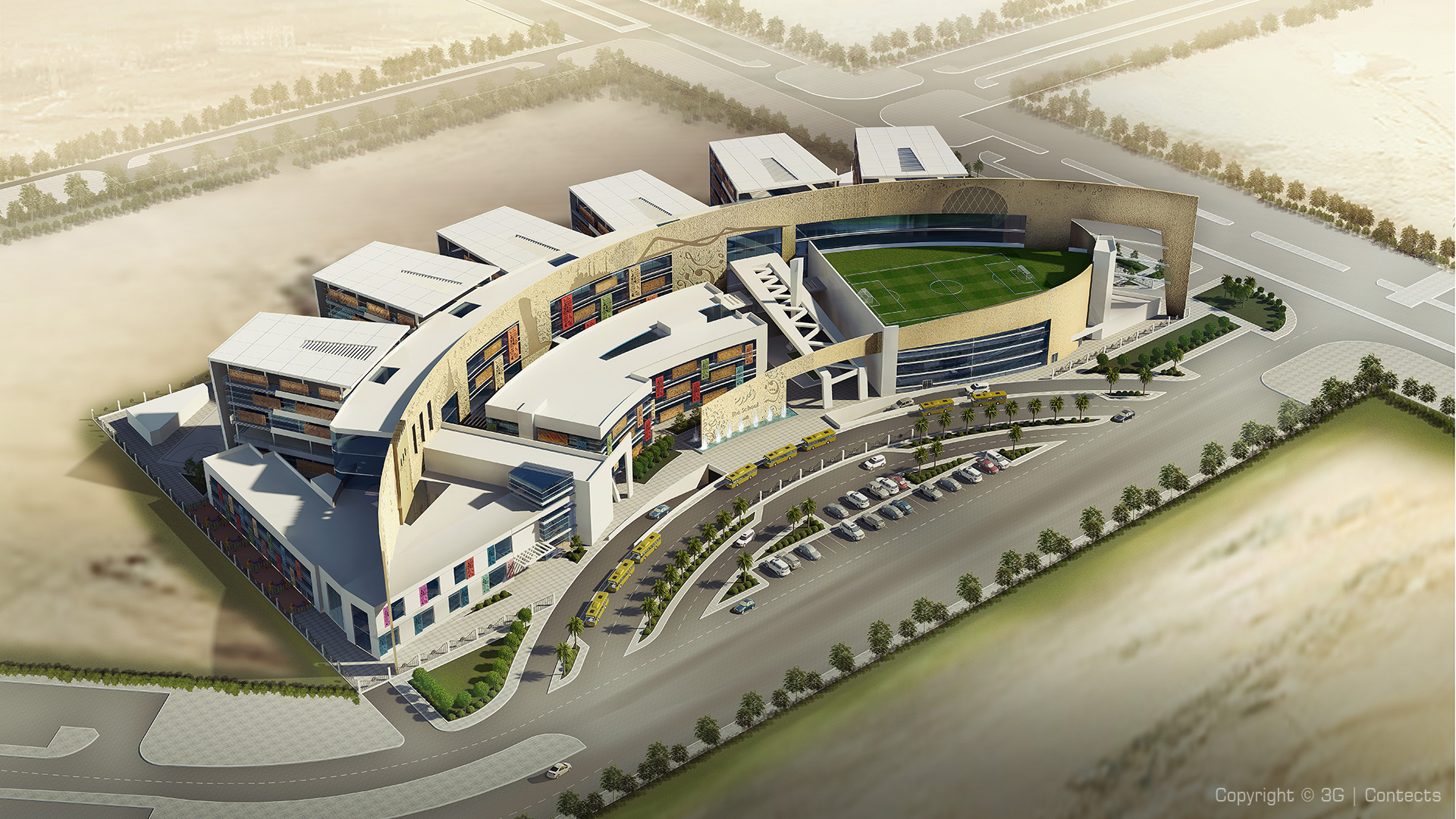 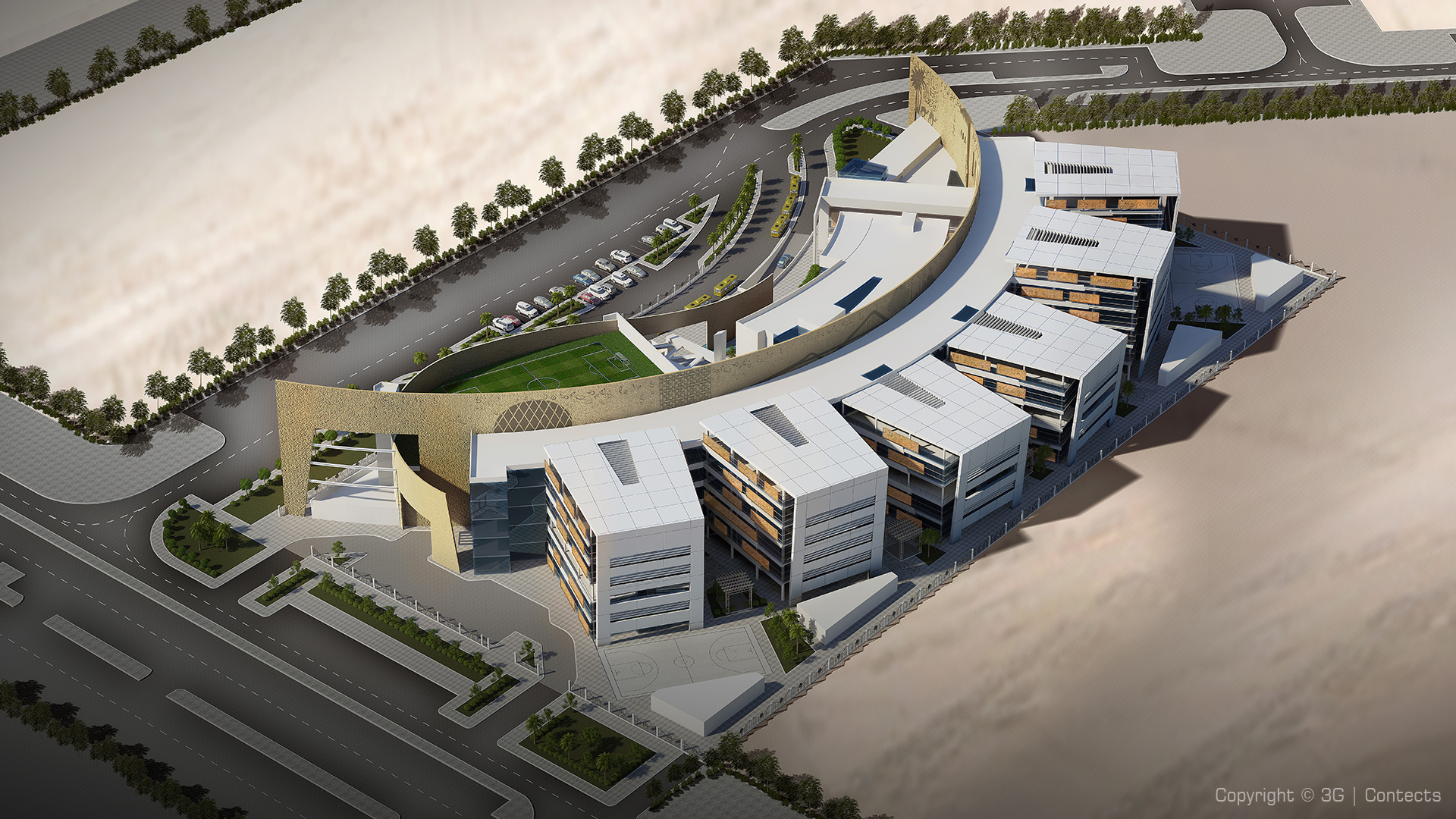 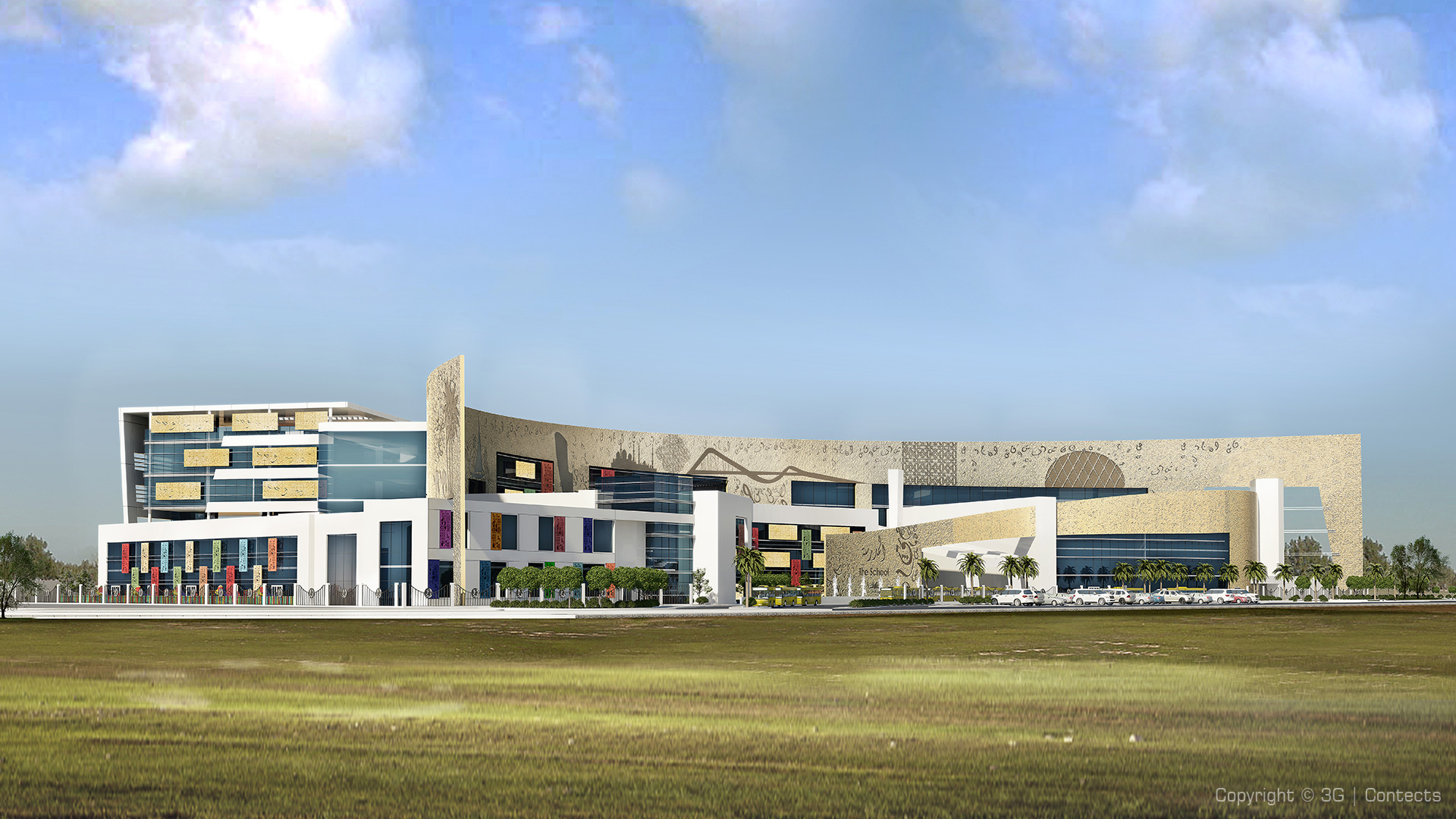 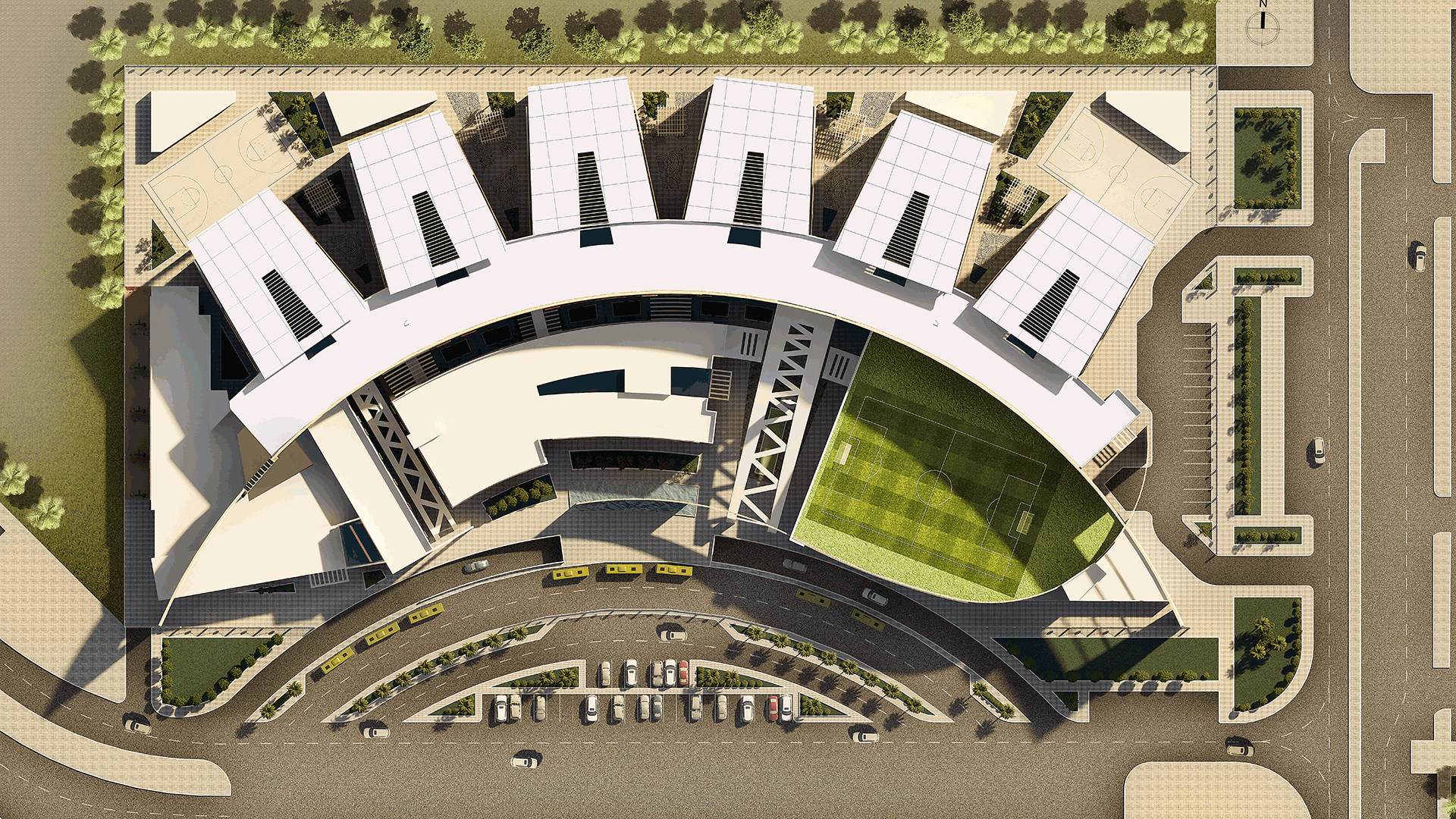 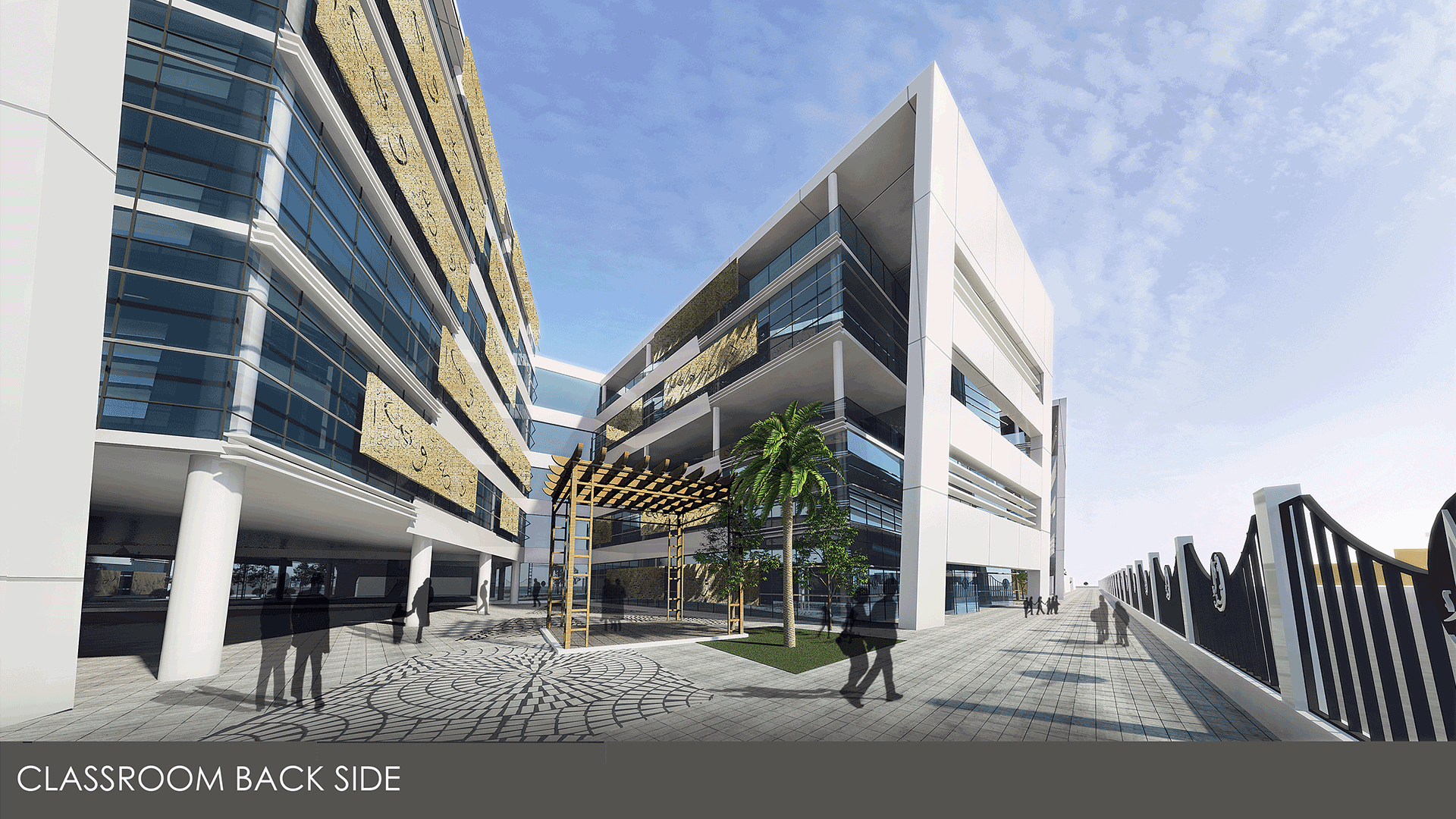 Location: At 6 locations in Abu Dhabi

The design concept of the School originated from the standard tools which students will use in their early learning careers; ‘The Book’ and ‘The Pen’. The two are combined to establish the learning and knowledge which advances in the growth and expansion of the world nations and civilizations.

The concept design is based on images of “Two Books”; one open and the other closed.

The area outlining the Administration Building is considered as the “closed book”; which represents the brains and vast knowledge of the teachers that spreads into the other facilities. Like the book; it is opened page by page to develop and increase the students’ knowledge. The “open book” concept represents the classrooms in which the students will be provided with the knowledge; which will consequently fill out the blank pages that the “open book” concept represents.

The two above books are connected by bridges which link the past ‘Administration’ and the present ‘Classrooms’. The future is represented by the green and colorful landscaping located between the classroom building clusters.

The architectural mass of the Kindergarten has to be treated in a quasi-random manner to demonstrate the randomness and lack of structure of the children’s playing era as a main part of children’s lives. This has no correlation with the upper school; which allows for the identification of year-grade groups. We consider the social activities of the children as the major influence which will consequently develop children’s personalities.

The randomness and lack of pattern in this design corresponds to scattered scrap paper awaiting to be organized and filed in the upcoming years of the children’s educational lives.  Located in the heart of the playground is the epi-center vertical model ‘The Pen’ which is the immediate focal point for the school.

The wall is divided into three parts separated by the entrances and representing the Past, Present, and Future. Creatively the final part of the wall is left blank for the students to utilize and record their achievement by adding to the accomplishments of the UAE.

The 3000 Student Capacity School project consists of different zones and functions from KG to grade 12 along with the administration building and multipurpose hall. The School has 3 cycles that are distributed on 6 learning communities; each learning community contains different zones and functions such as classrooms and support facilities. These learning communities are connected with educational facilities such as libraries and labs. The number of floors differs from zone to zone according to the type of space, The KG building has only 2 floors however the learning communities varies in the number of floors between 4 to 5. The total built up area of the school is 42,883 m2. The design is typical and suit the 6 plots across Abu Dhabi Emirate including Al Ain city. 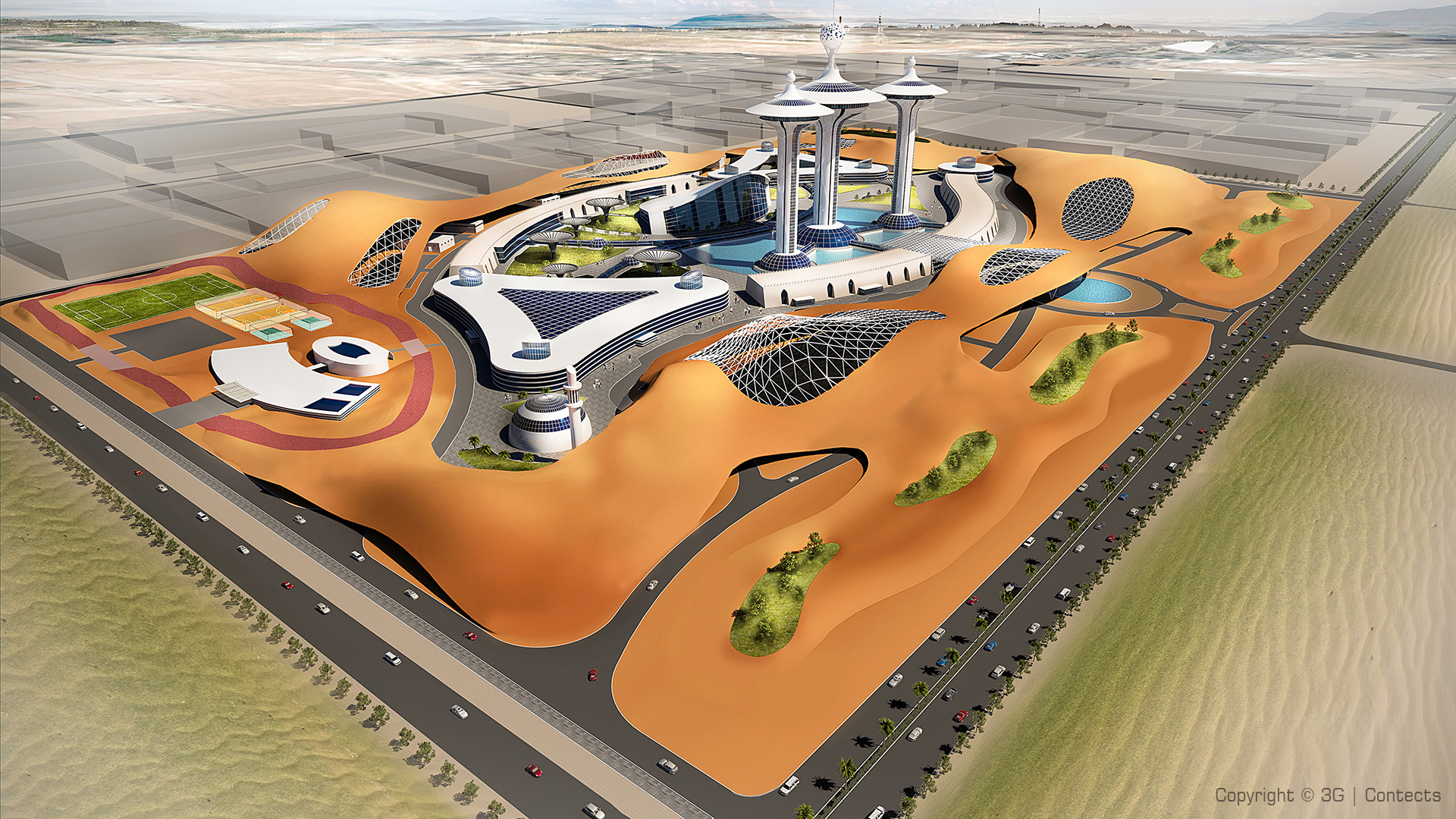